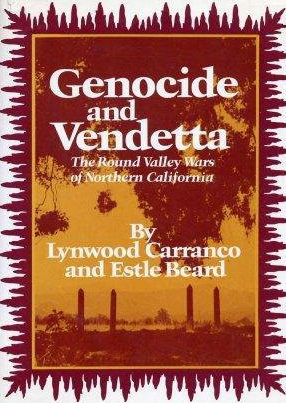 The book, Genocide and Vendetta: The Round Valley Wars of Northern California (University of Oklahoma Press, 1981), unpacks one of the darkest chapters in California history: the literal genocide (“a war of extermination” as the first governor of California, Peter Hardeman Burnett, enthusiastically phrased it in 1851) of Native Americans by European Americans in Round Valley, CA, in Mendocino County.

In 1987 the publisher destroyed the copies of Genocide and Vendetta remaining in its inventory and withdrew it from publication. Since then the book has been reproduced illegally and sold and distributed as contraband. Its withdrawal was the result of settling a suspicious charge of "unintentional" plagiarism that inspired a variety of conspiracy theories.

In 2012 artist and researcher Scott Holmquist began working to bring Genocide and Vendetta back from its early grave.

This is a Scott Holmquist Studio project.